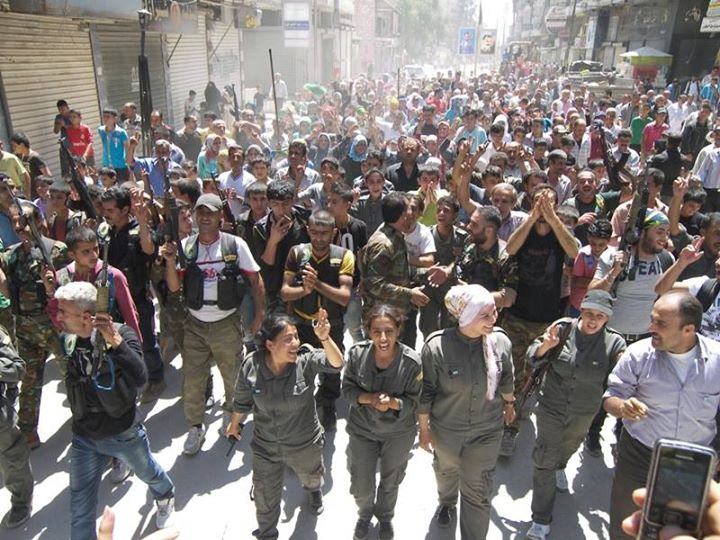 The ISIS’s craving to massacre has besieged the small town of Kobani. World powers, the global masters are speechless, and the absurd melody of human rights is suffocated in this corner of the world. The allied forces, so-called harbingers of bliss and democracy to the people here, are the mere watchers of ISIS onslaught and its brutality. Never will we forget how these allied forces, in the apparels of NATO and led by USA and Britain, wiped out the Iraqi Government and its complicated political and security machine in less than ten days a decade ago. How on earth are these Allies unable to annihilate the ISIS? In the name of war with the ISIS murderers and with the sole purpose of showcase in the mainstream media, the Allies air forces fly over and bombard the mountains and plains of these areas from time to time. All progressive movements of the region are nullified by the ISIS. As ISIS soars in power, it plunges, in the discourse of media such as BBC, from ‘battlers’ to terrorists and savages. NATO and civilized countries flood to this area with the intent of aid. Common sense can realize, without slightest difficulty, from where springs ISIS’s confusingly financial resources and its complicated war machine, how they are being backed and where the story leads to.

Kobani People are besieged by the genocide of ISIS and the battle in town goes on in its back streets. Its people are bravely resisting with bare hands with no support from foreigners. In the want of food, medicine and weapons, all they have is love and faith. They honorably embrace death since they are in love with life.

An autonomous society with its radical democracy, Kobani is experiencing three special years. Community councils, in which every walk of life has its own representatives, are the decision makers .Kobani people don’t have their own masters, they make their own destinies. Kobani has surpassed all identity borders of race and gender and is a perfect model of human equality, an example unrivaled in the modern history of the region; a life in which people can live differently, an equal life free from all identity limitations; a style of life in which every member of society, whatever their religion, gender and race is, live with equal rights and shoulder to shoulder they manage their society; a life in which man is valued because he is a human. From this viewpoint, Kobani is crucial as a resistance center. Reactionary governments of the area and colonial governments are scared of the spread of such an idea of lifestyle in the region, an idea roaring to the people of the world that ideals of equality and freedom are not mere dreams. It is ironically good to see that this unique idea of community life is being blotted out by the ISIS murderers. On one hand, the wealthy Kurds, having accumulated their wealth from the charities of NATO and new colonialisms are muted, horror-struck since their riches are in threat. Here, the claims of racism and nationalism disintegrate and the naked truth of politics is unveiled. The Kobani people, even if they are Kurds, are not important as their being is not materially beneficial. Here we are dealing with war of interests and Kobani is not in favor of their interests. On the other hand, Turkey, the perfect government for colonialism in the region, and as the new gendarme of the Middle-east is turning the threat of Kobani for its own geopolitical interests and in this battle of blood is negotiating on the lives of Kobani people.

Kobani is the symbol for the tortures defenseless people, a name that is so resonating in all Middle-East that even if it falls into the hands of genociders, murderers and reactionaries, it will eternally remain with us as an ideal of resistance for a better world; a world unstained by discrimination, authoritarianism and racism; a world free and equal. After Kobani, no colonial country will dare to brag about democracy and human rights. Kobani will haunt the world everywhere forever. Kobani, even if it falls, will stop history momentarily and stare at us tyrannized but magnificently making us sweat but filling us with hope simultaneously.

Kobani has divided our history into sections: World before and after Kobani's resistance experiences.

Kobani’s inspiring ideals will never cease to be with us, even if it falls.