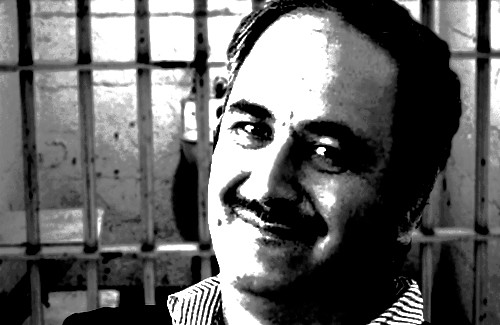 [A statement from workers committees in Iran]

Shahrokh Zamani, the brave and tireless fighter of the Iranian workers movement has died in Gohar Dasht prison. The news was received with total disbelief and utter shock for all. In our view, whatever reasons the authorities may offer, the responsibility for his death lies completely with those have imposed conditions of slavery on the workers of Iran and have taken away their rights to organise and struggle for a better life and on those who throw honourable and valiant human beings such as Shahrokh Zamani into dungeons.

The shocking news of his death in jail, without any prior history of illness, is not the first news of a loss of life by a prisoner, and given the current conditions in the country's jails, will not be the last. Although this untimely death will naturally appear suspicious to any unbiased person but even without any such suspicions the conditions in prisons, especially for worker activists and political prisoners are already murderous enough – for a thousand and one reason – from microwave torture to unsuitable food, from inadequate sanitation to absence of medical care, from unhealthy living quarters to every kind of mental and psychological pressures.

Shahrokh Zamani had committed no crimes other than defending the rights of his fellow workers. He had no official position, he had not defrauded any one, he had not harmed any body and he was not a partner to any thieve or highway robber; he was a building worker and a member of the Committee for the Establishment of Independent Trade Unions, a member of the co-ordinating committee  for the re-opening of the Paint Workers Syndicate and an honorary member of Paint Workers Syndicate of Alborz and the Central Province, and its founding mentor.

He was thrown into jail in 2011 for defending workers rights, but prison did not mean an end to struggles for a brave fighter such as Shahrokh. In his almost 5 years imprisonment, and from his two-men cell at Gohardasht prison he never stopped until his last breath to struggle and fight for just causes. Jails, courts, repression, and pressure from the security forces and jailers could not silence Shahrokh. He, with his unrivalled braveness and steadfastness, and without an iota of self promotion. was the real symbol of Iranian workers resistance and struggle for liberation from oppression and exploitation.

The death of Shahrokh is an irreplaceable loss for his family and friends and for the workers movement as a whole. We are sincerely sorrow for this great loss and declare our sympathies with his family, friends, his fellow prisoners and workers all over the country. But despite this unbearable pain we will not retreat into our sorrow and we will turn his death into the banner of workers solidarity and unity.

We salute you Shahrokh Zamani!

The Centre for the Defence of Workers Rights;

The Committee for the Establishment of Independent Trade Unions;

The Free Trade Union of Workers in Iran.